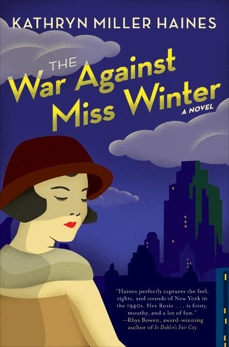 It's 1943, and the war escalating in Europe and the Pacific seems far away. But for aspiring actress Rosie Winter, the war feels as if it were right in New York City—what with food rationing and frequent blackouts . . . and a boyfriend she hasn't heard word one from since he enlisted in the navy. Now her rent is coming due and she hasn't been cast in anything for six months. The factories are desperate for women workers, but Rosie the Thespian isn't about to become Rosie the Riveter, so she grabs a part-time job at a seamy, lowbrow detective agency instead.

However, there's more to the Big City gumshoe game than chasing lowlife cheating spouses. When her boss turns up dead, Rosie finds herself caught up in a ticklish high society mystery, mingling with mobsters and searching for a notorious missing script. Maybe she has no crime-fighting experience—but Rosie certainly knows how to act the role. No matter how the war against Miss Winter turns out, it's not going to end with her surrender!

Evocative, entertaining, and wonderfully original, Kathryn Miller Haines's War Against Miss Winter introduces not only an unforgettable new sleuth but also an exciting new voice in the mystery genre, with a fast-paced tale of murder and deception that brings the World War II era vividly to life.