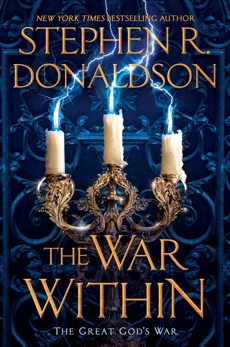 Synopsis: Stephen R. Donaldson, the New York Times bestselling author of The Chronicles of Thomas Covenant, returns to the world of his Great God’s War fantasy epic as two kingdoms— united by force—prepare to be challenged by a merciless enemy…

It has been twenty years since Prince Bifalt of Belleger discovered the Last Repository and the sorcerous knowledge hidden there. At the behest of the repository's magisters, and in return for the restoration of sorcery to both kingdoms, the realms of Belleger and Amika ceased generations of war. Their alliance was sealed with the marriage of Bifalt to Estie, the crown princess of Amika. But the peace--and their marriage--has been uneasy.

Now the terrible war that King Bifalt and Queen Estie feared is coming. An ancient enemy has discovered the location of the Last Repository, and a mighty horde of dark forces is massing to attack the library and take the magical knowledge it guards. That horde will slaughter every man, woman, and child in its path, destroying both Belleger and Amika along the way.

With their alliance undermined by lingering hostility and conspiracies threatening, it will take all of the monarchs' strength and will to inspire their kingdoms to become one to defend their land, or all is lost....