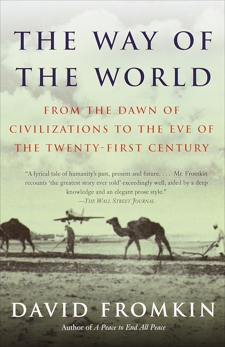 The Way of the World: From the Dawn of Civilizations to the Eve of the Twenty-first Century

Synopsis: How did we get here?

David Fromkin provides arresting and dramatic answers to the questions we ask ourselves as we approach the new millennium. He maps and illuminates the paths by which humanity came to its current state, giving coherence and meaning to the main turning points along the way by relating them to a vision of things to come. His unconventional approach to narrating universal history is to focus on the relevant past and to single out the eight critical evolutions that brought the world from the Big Bang to the eve of the twenty-first century.

He describes how human beings survived by adapting to a world they had not yet begun to make their own, and how they created and developed organized society, religion, and warfare. He emphasizes the transformative forces of art and the written word, and the explosive effects of scientific discoveries. He traces the course of commerce, exploration, the growth of law, and the quest for freedom, and details how their convergence led to the world of today.

History's great movements and moments are here: the rise of the first empires in Mesopotamia; the exodus from Pharaoh's Egypt; the coming of Moses, Confucius, the Buddha, Jesus, and Muhammad; the fall of the Roman Empire; the rise of China; Vasco da Gama finding the sea road to India that led to unification of the globe under European leadership. Connections are made: the invention of writing, of the alphabet, of the printing press, and of the computer lead to an information revolution that is shaping the world of tomorrow. The industrial, scientific, and technological revolutions are related to the credit revolution that lies behind today's world economy. The eighty-year world war of the twentieth century, which ended only on August 31, 1994, when the last Russian troops left German soil, points the way to a long but perhaps troubled peace in the twenty-first.

Where are we now? The Way of the World asserts that the human race has been borne on the waters of a great river--a river of scientific and technological innovation that has been flowing in the Western world for a thousand years, and that now surges forward more strongly than ever. This river highway, it says, has become the way of the world; and because the constitutional and open society that the United States champions is uniquely suited to it, America will be the lucky country of the centuries to come. Fromkin concludes by examining some of the choices that lie ahead for a world still constrained by its past and by human nature but endowed by science with new powers and possibilities. He pictures exciting prospects ahead--if the United States takes the lead, and can develop wisdom on a scale to match its good fortune.