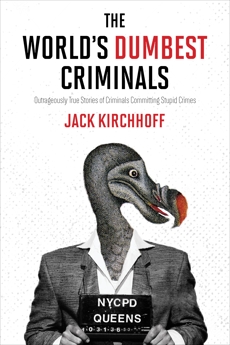 Two men photographed each other stealing thousands of dollars from gambling machines. An armed man successfully robbed a pharmacy and was captured after he boasted about it on social media. A burglar spent time cleaning the house he was robbing and even restocked some groceries before he was discovered fast asleep in the homeowner’s bed. Two drunken louts stole a penguin from an aquarium and tried to release it into a canal once they were sober (the creature was returned to the polar enclosure, unharmed). Another man attempted to hold up a bank using a cucumber as a weapon. Two fellows tried to rob a bar where the town’s police department was holding a retirement party for one of its members.

For every Moriarty, there are a thousand stupid criminals who get caught in the act, or who boast about their success on social media, or whose plans are so foolish that the police have little difficulty tracking them down. Throughout history, these criminals have been easily captured; some have even died during an ill-fated escape. New criminals are apprehended every day thanks to their own genius, their exploits captured on YouTube and Instagram.

The World’s Dumbest Criminals records more than one hundred of the most ridiculous, absurd and bizarre crimes that have landed on the police blotter in recent years. Hilarious and outrageous, this book will make you shake your head and perhaps second-guess your own plans to commit petty larceny.