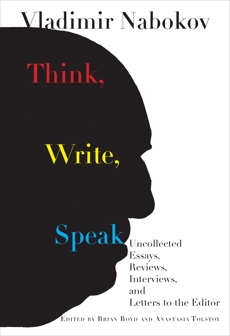 Synopsis: A rich compilation of the previously uncollected Russian and English prose and interviews of one of the twentieth century's greatest writers, edited by Nabokov experts Brian Boyd and Anastasia Tolstoy.

“I think like a genius, I write like a distinguished author, and I speak like a child": so Vladimir Nabokov famously wrote in the introduction to his volume of selected prose, Strong Opinions. Think, Write, Speak follows up where that volume left off, with a rich compilation of his uncollected prose and interviews, from a 1921 essay about Cambridge to two final interviews in 1977. The chronological order allows us to watch the Cambridge student and the fledgling Berlin reviewer and poet turn into the acclaimed Paris émigré novelist whose stature brought him to teach in America, where his international success exploded with Lolita and propelled him back to Europe. Whether his subject is Proust or Pushkin, the sport of boxing or the privileges of democracy, Nabokov’s supreme individuality, his keen wit, and his alertness to the details of life illuminate the page.