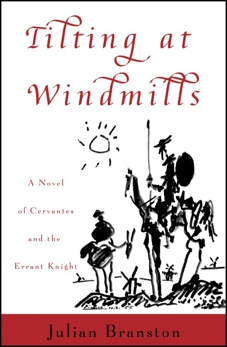 Tilting at Windmills: A Novel of Cervantes and the Errant Knight

Synopsis: In seventeenth-century Valladolid, Spain’s new capital, Miguel Cervantes is busy writing his comic masterpiece, Don Quixote, which is being issued in installments. It is quickly making him the most popular author in the country, when three potential disasters strike: Cervantes discovers that there is a real Don Quixote, just like the character he thought he’d invented; a jealous poet concocts a scheme involving one of the novel’s other characters to make Cervantes a laughingstock; and Cervantes falls in love with a beautiful, widowed, but un-available duchess. Many duels, misunderstandings, politicking, and betrayals later, Don Quixote himself comes to Cervantes’ rescue.

This sparkling tale of crazed knights, thwarted love, and literary rivalry is set against the back-ground of a mighty empire suffering from a century of reckless wars and a ruling hierarchy stultified by patronage and ritual. Peopled with an engagingly idiosyncratic cast that ranges from a Machiavellian duke to a misanthropic poacher, this charming story is imbued with the spirit, verve, and humor of the great novel to which it pays playful tribute. Tilting at Windmills is a dazzling evocation of Cervantes’ life and times, and a brilliant weave of fact, fiction, and farce.