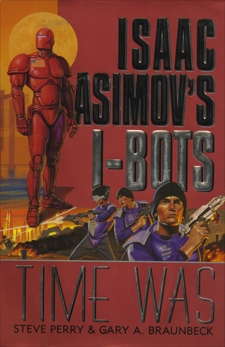 Synopsis: Annabelle Donohoe, the CEO of World Tech, is mad as hell.

Her dreams of world domination died the day Zac Robillard discovered her evil plans and fled World Tech, taking his greatest creation, his beloved I-Bots, and all his research, with him. (Read about their origins in Isaac Asimov's History of I-Bots!) More than super-machines, more than robots, the I-Bots are eerilyhuman in appearance, but not in abilities. Their genetic components--based on human DNA--and mechanical infrastructures give them pshyical strength and powers humans can only imagine, and a measure of free will impossible in robots.

Annabelle wants them back and will stop at nothing to get her way, including hiring the world's deadliest assassin to find Zac, and his I-Bots--the beautiful Radiant and Killaine, clever Itazura, Psy-4, and Stonewall--and bring them in...or kill them. For if Annabelle cannot have the I-Bots she vows that no one else can either. But Janus, the ruthless killer, is not the only hunter they must elude...

Surrounded by enemies, Zac and the I-Bots can find no safe place, not even the streets. In the year 2013, the Silver Metal Stompers, a neo-Nazi gang, roam the nation's cities wreaking havoc on robots, especially Scrappers, outmoded homeless robots who huddle in hobo camps, rusting away unless they are repaired by a mysterious humanitarian and robotarian called DocScrap. In an unlucky twist of fate, the Stompers discover DocScrap is none other than Zac Robillard and that the I-Bots aren't exactly human...and vow to crush Zac and the I-Bots into wreckage.

Based on an original concept by Isaac Asimov, Time Was is a nonstop action adventure combining all the excitement of Golden Age SF with the technological wonders of modern cybernetics and quantum science.

This remarkable collaboration between the greatest science fiction genius of all time and a team of brilliant young writers is a major publishing event. Only the Grand Master himself could have foreseen the awesome wonders depicted in Isaac Asimov's I-Bots. And only today's finest storytellers could have brought them so vividly to life.