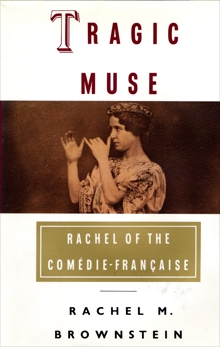 Tragic Muse: Rachel of the Comedie-Francaise

Synopsis: Rachel Felix (1821-58), the homely daughter of poor Jewish peddlers, was the first stage actress to achieve international stardom - and the last person one would have expected to resurrect the cultural patrimony of France. Yet her passionate, startling performances of the works of Racine and Corneille saved them from almost certain obsolescence after the fall of Napoleon (who had relished classical French tragedy) and the emergence of Romanticism. Audiences in Paris, London, Boston, and Moscow thrilled to her voice, and devoured the rumors of her offstage promiscuity and extravagance. Her fame - equal parts popularity and notoriety - was so great that she could nonchalantly dispose of her last name. La grande Rachel virtually invented the role of the superstar, while remaining a symbol of the highest art and most serious cultural pursuits. Indeed, her identity was fraught with such contradictions - which intrigued the public all the more. From the moment she was discovered playing the guitar on the streets of Lyons, to her debut on the Parisian stage at the age of fifteen, to her critical and commercial triumphs as Camille, Phedre, and other tormented women, Rachel's career was exhaustively "managed." A series of theater gurus, influential reviewers, and impresarios - including her brash and opportunistic father - claimed the credit for her astonishing success. What this abundance of male managers has always obscured is Rachel's own decisiveness and control over her time and money - not only did she play her various champions (and high-profile lovers) against one another, she openly defied them. Some called her stubborn, even perverse; in these pages, we come to recognize her as a woman ahead of her time, a charismatic individual very much in charge of her own destiny. As her fascination with all things Napoleonic suggests, Rachel liked power - both personal and professional - and had the talent to command it.