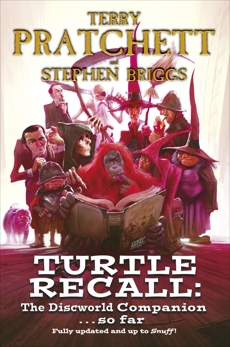 For every Pratchett fan, the must-have fully updated guidebook to Discworld!

The Discworld, as everyone knows, is a flat world balanced on the backs of four elephants which, in turn, stand on the shell of the giant star turtle, the Great A'Tuin, as it slowly swims through space.

It is also a global publishing phenomenon with sales of nearly 85 million books worldwide (and counting). With 39 books in the canon, not including the various guides, maps, diaries, and other tie-in volumes, there's a lot of Discworld to keep track of—more than most fans can manage without magic.

Turtle Recall is the ultimate authority on probably the most heavily populated—certainly the most hilarious—setting in fantasy literature and includes a guide to Discworld locales from Ankh-Morpork to Zemphis, as well as information to help you distinguish Achmed the Mad from Jack Zweiblumen and the Agatean Empire from the Zoons. Plus much, much more.

Covering everything from The Colour of Magic, the first Discworld novel, through Snuff!, Turtle Recall: The Discworld Companion . . . So Far is the most up-to-the-minute encyclopedia of Terry Pratchett's extraordinary universe available.