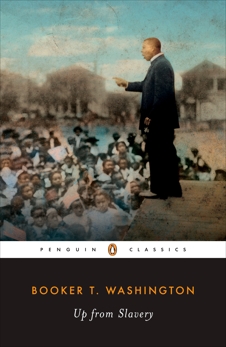 Up from Slavery: An Autobiography

Synopsis: During his unchallenged reign as black America's foremost spokesman, former slave Booker T. Washington treaded a dangerous middle ground in a time of racial backlash and disfranchisement: as he publicly acquiesced to whites on issues of social equality, he fiercely exhorted blacks, through his national political machine, to unite and improve their lot. Though Washington worked ceaselessly, through many channels, to gain moral and financial support for his people and for his beloved Tuskegee Institute, Up from Slavery, his autobiography, helped him at these endeavours more than all other efforts combined. Vividly recounting Washington's life - his childhood as a slave, his struggle for education, his founding and presidency of the Tuskegee Institute, his meetings with the country's leaders, Up from Slavery reveals the conviction he held that the black man's salvation lay in education, industriousness and self-reliance. Louis R. Harlan's introduction fully assesses the impact of this simply written, anecdotal life story that bears the mark of a man of real courage, talent and dedication.