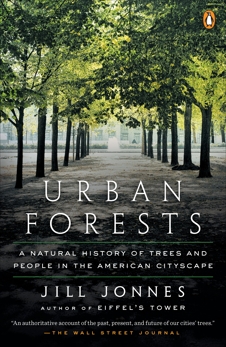 Synopsis: “Far-ranging and deeply researched, Urban Forests reveals the beauty and significance of the trees around us.” —Elizabeth Kolbert, Pulitzer Prize-winning author of The Sixth Extinction

“Jonnes extols the many contributions that trees make to city life and celebrates the men and women who stood up for America’s city trees over the past two centuries. . . . An authoritative account.” —Gerard Helferich, The Wall Street Journal

“We all know that trees can make streets look prettier. But in her new book Urban Forests, Jill Jonnes explains how they make them safer as well.” —Sara Begley, Time Magazine

A celebration of urban trees and the Americans—presidents, plant explorers, visionaries, citizen activists, scientists, nurserymen, and tree nerds—whose arboreal passions have shaped and ornamented the nation’s cities, from Jefferson’s day to the present

As nature’s largest and longest-lived creations, trees play an extraordinarily important role in our cities; they are living landmarks that define space, cool the air, soothe our psyches, and connect us to nature and our past. Today, four-fifths of Americans live in or near urban areas, surrounded by millions of trees of hundreds of different species. Despite their ubiquity and familiarity, most of us take trees for granted and know little of their fascinating natural history or remarkable civic virtues.

Jill Jonnes’s Urban Forests tells the captivating stories of the founding mothers and fathers of urban forestry, in addition to those arboreal advocates presently using the latest technologies to illuminate the value of trees to public health and to our urban infrastructure. The book examines such questions as the character of American urban forests and the effect that tree-rich landscaping might have on commerce, crime, and human well-being. For amateur botanists, urbanists, environmentalists, and policymakers, Urban Forests will be a revelation of one of the greatest, most productive, and most beautiful of our natural resources.