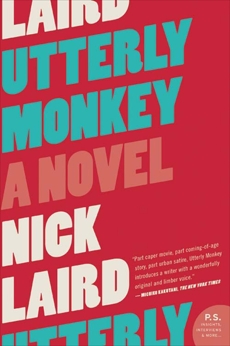 Danny Williams didn't mean to be a lawyer, but somehow he is -- and for up to eighteen hours a day. He's well paid, home owning, and twenty-seven but is also overworked, lonely, and frequently stoned. The plan was to leave the troubles of a small town in Northern Ireland for the big city in England, but one evening an old school friend, Geordie, bursts into Danny's shiny new life. On the run from a Loyalist militia, Geordie brings everything Danny thought he had left behind and dumps it on his doorstep.

With infectious wit and energy to burn, Utterly Monkey is a searing, fiercely funny, and ultimately redemptive novel about surviving an office job, outwitting the bad guys, and, hopefully, getting the girl.