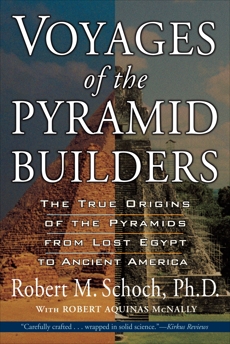 Voyages of the Pyramid Builders

Synopsis: Is it a mere coincidence that pyramids are found throughout our globe? Did cultures ranging across vast spaces in geography and time, such as the ancient Egyptians; early Bud-dhists; the Maya, Inca, Toltec, and Aztec civilizations of the Americas; the Celts of the British Isles; and even the Mississippi Indians of pre-Columbus Illinois, simply dream the same dreams and envision the same structures?

Robert M. Schoch-one of the world's preeminent geologists in recasting the date of the building of the Great Sphinx-believes otherwise. In this dramatic and meticulously reasoned book, Schoch, like anthropologist Thor Heyerdahl in his classic Kon-Tiki, argues that ancient cultures traveled great distances by sea. Indeed, he believes that primeval sailors traveled from the Eastern continent, primarily Southeast Asia, and spread the idea of pyramids across the globe, particularly to the New World of the Americas where they abounded until the days of the Conquistadors.