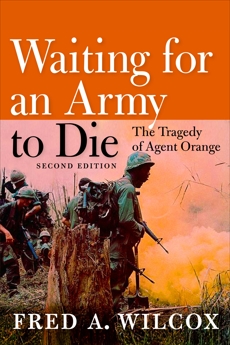 Waiting for an Army to Die: The Tragedy of Agent Orange

Synopsis: "I died in Vietnam, but I didn’t even know it," said a young Vietnam vet on the Today Show one morning in 1978, shocking viewers across the country. Waiting for an Army to Die: The Tragedy of Agent Orange—the first book ever written on the effects of Agent Orange—tells this young vet’s story and that of hundreds of thousands of other former American servicemen. During the war, the US sprayed an estimated 12 million gallons of Agent Orange on Vietnam, in order to defoliate close to 5 million acres of its land. "Had anyone predicted that millions of human beings exposed to Agent Orange/dioxin would get sick and die," scholar Fred A. Wilcox writes in the new introduction to his seminal book, "their warnings would have been dismissed as sci-fi fantasy or apocalyptic nonsense." Told in a gripping and compassionate narrative style that travels from the war in Vietnam to the war at home, and through portraits of many of the affected survivors, their families, and the doctors and scientists whose clinical experience and research gave the lie to the government whitewash, Waiting for an Army to Die tells a story that, thirty years later, continues to create new twists and turns for Americans still waiting for justice and an honest account of what happened to them. Vietnam has chosen August 10—the day that the US began spraying Agent Orange on Vietnam—as Agent Orange Day, to commemorate all its citizens who were affected by the deadly chemical. The new second edition of Waiting for an Army to Die will be released upon the third anniversary of this day, in honor of all those whose families have suffered, and continue to suffer, from this tragedy.