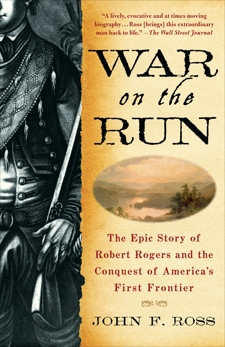 War on the Run: The Epic Story of Robert Rogers and the Conquest of America's First Frontier

Synopsis: Often hailed as the godfather of today’s elite special forces, Robert Rogers trained and led an unorthodox unit of green provincials, raw woodsmen, farmers, and Indian scouts on “impossible” missions in colonial America that are still the stuff of soldiers’ legend. The child of marginalized Scots-Irish immigrants, Rogers learned to survive in New England’s dark and deadly forests, grasping, as did few others, that a new world required new forms of warfare. John F. Ross not only re-creates Rogers’s life and his spectacular battles with breathtaking immediacy and meticulous accuracy, but brings a new and provocative perspective on Rogers’s unique vision of a unified continent, one that would influence Thomas Jefferson and inspire the Lewis and Clark expedition. Rogers’s principles of unconventional war-making would lay the groundwork for the colonial strategy later used in the War of Independence—and prove so compelling that army rangers still study them today. Robert Rogers, a backwoods founding father, was heroic, admirable, brutal, canny, ambitious, duplicitous, visionary, and much more—like America itself.