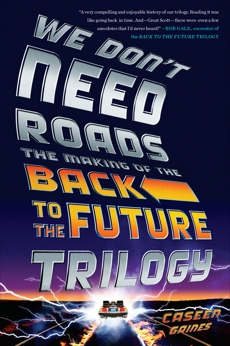 Synopsis: A behind-the-scenes look at the making of the iconic Back to the Future trilogy—the perfect movie gift for fans of the franchise, actors, writers, and filmmakers who contributed to this beloved pop culture phenomenon.

Long before Marty McFly and Doc Brown traveled through time in a flying DeLorean, director Robert Zemeckis, and his friend and writing partner Bob Gale, worked tirelessly to break into the industry with a hit. During their journey to realize their dream, they encountered unprecedented challenges and regularly took the difficult way out.

For the first time ever, the story of how these two young filmmakers struck lightning is being told by those who witnessed it. We Don’t Need Roads draws from over 500 hours of interviews, including original interviews with Zemeckis, Gale, Christopher Lloyd, Lea Thompson, Huey Lewis, and over fifty others who contributed to one of the most popular and profitable film trilogies of all time. The book includes a 16-page color photo insert with behind-the-scenes pictures, concept art, and more.

With a focus not only on the movies, but also the lasting impact of the franchise and its fandom, We Don’t Need Roads is the ultimate read for anyone who has ever wanted to ride a Hoverboard, hang from the top of a clock tower, travel through the space-time continuum, or find out what really happened to Eric Stoltz after the first six weeks of filming. So, why don’t you make like a tree and get outta here—and start reading! We Don’t Need Roads is your density.

“What fun! Deeply researched and engagingly written...the book Back to the Future fans have been craving for decades. Geekily enthusiastic and chock full of never-before-heard tales of what went on both on and off the screen, We Don't Need Roads is a book worthy of the beloved trilogy itself.”—Brian Jay Jones, author of the national bestseller Jim Henson: The Biography

“A very compelling and enjoyable history of our trilogy. For me, reading it was like going back in time. And—Great Scott—there were even a few anecdotes that I'd never heard!”—Bob Gale, co-creator, co-producer, and co-writer of the Back to the Future trilogy