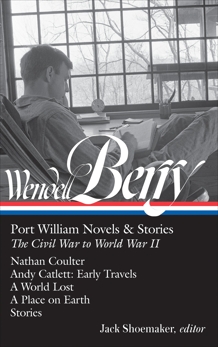 Synopsis: Library of America inaugurates its edition of the complete fiction of one of America's most beloved living writers

For more than fifty years, in eight novels and fortytwo short stories, Wendell Berry (b. 1934) has created an indelible portrait of rural America through the lens of Port William, Kentucky, one of the most fully imagined places in American literature. Taken together, these novels and stories form a masterwork of American prose: straightforward, spare, and lyrical. Now, for the first time, in an edition prepared in consultation with the author, Library of America is presenting the complete story of Port William in the order of narrative chronology. This first volume, which spans from the Civil War to World War II, gathers the novels Nathan Coulter (1960, revised 1985), A Place on Earth (1967, revised 1983), A World Lost (1996), and Andy Catlett: Early Travels (2006), along with twenty-three short stories, among them such favorites as “Watch With Me,” “Thicker than Liquor,” and “A Desirable Woman.” It also features a newly researched chronology of Berry’s life and career, a map and a Port William Membership family tree, and helpful notes.