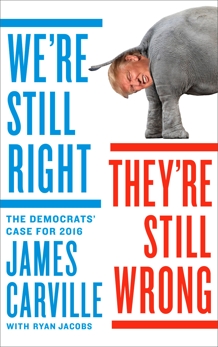 Synopsis: Every politico and pundit has tried to explain the 2016 presidential race, but James Carville – the multiple best-selling Ragin’ Cajun and grand strategist of Bill Clinton’s rise to the White House – has largely stayed silent.  Until now.

“He straddled the punch bowl, dropped his pants, and whipped out his member, which, he assured everyone, was very large. Then Donald Trump pissed right into the punch of the Republican Party.”

So begins We’re Still Right, They’re Still Wrong– with that image of Donald Trump defiling the celebration that should’ve been the GOP Establishment’s easy march to the White House.

In We’re Still Right, They’re Still Wrong, Carville updates his #1 New York Times bestseller from 1996, the campaign tract that Bill Clinton once credited for his re-election. Carville skewers the GOP’s dumpster fire of a record over the past twenty years, and argues that Trump is the living manifestation of a failed party. From income inequality to race relations, Carville believes that Democratic Party is not only the dominant party of the past, but of America’s future, too – and he makes the case in his uncensored and earthy style.

Among other things, We’re Still Right, They’re Still Wrong features a hot take on the Clinton e-mail “scandal,” a story about Carville’s momma’ schooling a pair of crawfish mongers, a lecture on political panics called “The Anatomy of Bullshit,” and a recipe for how to grill your (non-existent) Trump Steak.

And wit and sharp tongue aside, Carville turns it all into the most cogent and thoughtful analysis of the 2016 and how the Democrats can—and must—be victorious.