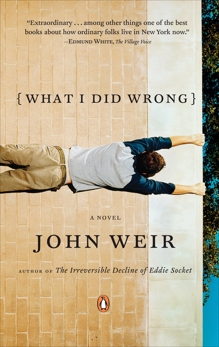 What I Did Wrong

Synopsis: What I Did Wrong is a dazzling return to fiction for John Weir, a romance that embraces its objects—from the endlessly bewildering question of what it means to be a man to the aspect of New York in all its manic and heartbreaking grandeur. It is a powerfully moving—and often disarmingly funny—book about loss, character, and sexuality in the post-AIDS era, a survivor’s tale in an age when all the certainties have lost their logic and force.

Tom, a forty-two-year-old English professor, watched his best friend, Zack, die a terrible, raging death, and finds himself haunted by it as he himself slouches gingerly and precariously into middle age, questioning every certainty he had about his identity as a gay man. That “gender trouble” is played out on the field of his college classes, populated with testosterone-fortified street-wise guys from Queens whose cocky bravado can’t quite compensate for their own confused masculinity. Hardly immune to the occasional unnervingly romantic jolt from his students, Tom tries to balance his awkwardly developing friendships with them. In the process, he begins to find common ground with these proud young men and, surprisingly, a way to claim his own place in the world, and in history.