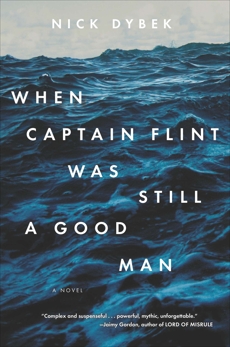 When Captain Flint Was Still a Good Man

Synopsis: Every fall, the men of Loyalty Island sail from the Olympic Peninsula up to the Bering Sea to spend the winter catching king crab. Their dangerous occupation keeps food on the table but constantly threatens to leave empty seats around it.

To Cal, Alaska remains as mythical and mysterious as Treasure Island, and the stories his father returns with are as mesmerizing as those he once invented about Captain Flint before he turned pirate. But while Cal is too young to accompany his father, he is old enough to know that everything depends on the fate of those few boats thousands of miles to the north. He is also old enough to feel the tension between his parents over whether he will follow in his father's footsteps. And old enough to wonder about his mother's relationship with John Gaunt, owner of the fleet.

Then Gaunt dies suddenly, leaving the business in the hands of his son, who seems intent on selling away the fishermen's livelihood. Soon Cal stumbles on evidence that his father may have taken extreme measures to salvage their way of life. As winter comes on, his suspicions deepening and his moral compass shattered, he is forced to make a terrible choice.