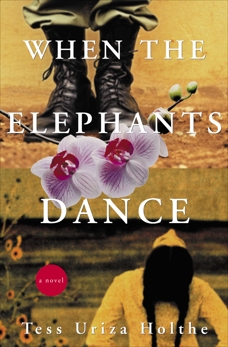 When the Elephants Dance: A Novel

Synopsis: “Papa explains the war like this: ‘When the elephants dance, the chickens must be careful.’ The great beasts, as they circle one another, shaking the trees and trumpeting loudly, are the Amerikanos and the Japanese as they fight. And our Philippine Islands? We are the small chickens.”

Once in a great while comes a storyteller who can illuminate worlds large and small, in ways both magical and true to life. When the Elephants Dance is set in the waning days of World War II, as the Japanese and the Americans engage in a fierce battle for possession of the Philippine Islands. Through the eyes of three narrators, thirteen-year-old Alejandro Karangalan, his spirited older sister Isabelle, and Domingo, a passionate guerilla commander, we see how ordinary people find hope for survival where none seems to exist. While the Karangalan family and their neighbors huddle together for survival in the cellar of a house, they tell magical stories to one another based on Filipino myth that transport the listeners from the chaos of the war around them and give them new resolve to continue fighting. Outside the safety of their refuge the war rages on—fiery bombs torch the countryside, Japanese soldiers round up and interrogate innocent people, and from the hills guerilla fighters wage a desperate campaign against the enemy. Inside the cellar, these men, women, and children put their hopes and dreams on hold as they wait out the war.

This stunning debut novel celebrates with richness and depth the spirit of the Filipino people and their fascinating story and marks the introduction of an author who will join the ranks of writers such as Arundhati Roy, Manil Suri, and Amy Tan.