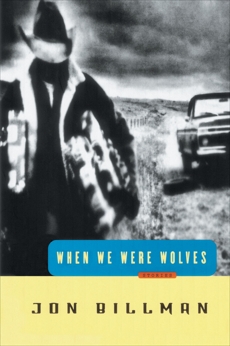 When We Were Wolves: Stories

Synopsis: "If you could have been around a hundred and fifty years ago, and passed through the landscape as a beaver-trapping tough with Jim Bridger or Jedediah Smith, before coal barons, before soda ash and oil, before Mormons, before you could stand outside and watch satellites pass through the night sky or silhouettes kissing in warm apartment windows, when this history was wild and new, you could have just pointed and named something of permanence, a mountain, a river--at least a creek--after yourself. Or they would have named it for you, a permanent mark, just for being here."

From a new talent that Annie Proulx has called an "important emerging writer" comes a surprising and expansive collection of stories, steeped in the lore of the frontier but unmistakably fresh and of our time.

When We Were Wolves roams over a West we never knew existed--colonized by rogues and tricksters, Custer impersonators, firefighters with a weakness for arson, and the other rootless folk who come to rest under the vast and forgiving desert sky. Jon Billman writes about accidental lives: people who are trapped in unsuitable marriages, impossible situations, but who handle them with the odd grace of those who are determined to live by their own strange code. He mingles the skewed humor of David Sedaris with the loping, rough-edged appeal of Tom McGuane. This is a beguiling new entry on the map of American fiction.