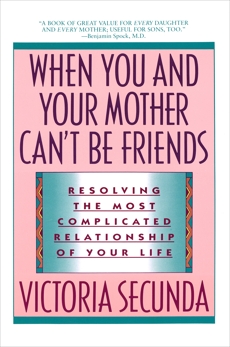 When You and Your Mother Can't Be Friends: Resolving the Most Complicated Relationship of Your Life

Synopsis: “A book of great value for every daughter and every mother; useful for sons, too.”—Benjamin Spock, M.D.

From the Introduction:
The goal of this book is to help readers achieve that separation so that they can either find a way to be friends with their mothers, or at least recognize and accept that their mothers did the best they could—even if it wasn't “good enough”—and to stop blaming them. Among the issues to be covered:

• To understand how a daughter's attachment to her mother—more so than her relationship with her father—colors all her other relationships, and to analyze why it is more difficult for daughters than sons to separate from their mothers, as well as why daughters are more subject than sons to a mother's manipulation
• To recognize the difference between a healthy and a destructive mother-daughter connection, and to define clearly the “bad mommy,” in order to help readers who have trouble acknowledging their childhood losses to begin to comprehend them
• To conjugate what I call the “Bad Mommy Taboo”—why our culture is more eager to protect the sanctity of maternity than it is to protect emotionally abused daughters
• To describe the evolution of the "unpleasable" mother—in all likelihood, she was bereft of maternal love as a child—and to recognize the huge, and often poignant, stake she has in keeping her grown daughter dependent and off-balance
• To illustrate the consequent controlling behavior—in some cases, cloaked in fragility or good intentions—of such mothers, which falls into general patterns, including: the Doormat, the Critic, the Smotherer, the Avenger, the Deserter
• To understand that the daughter has a similar stake in either being a slave to or hating her mother—the two sides of her depen dency and immaturity
• To illustrate the responsive behavior—and survival mechanisms —of daughters, which is determined in part by such variables as birth rank, family history, and temperament, and which also falls into patterns, including: the Angel, the Superachiever, the Cipher, the Troublemaker, the Defector
• To show how to redefine the mother-daughter relationship, so that each can learn to see and accept the other as she is today, appreciating each other's good qualities and not being snared by the bad
• Finally, to demonstrate that a redefined relationship with one's mother—adult to adult—frees you from the past, whether that re definition ultimately results in real friendship, affectionate truce, or divorce.