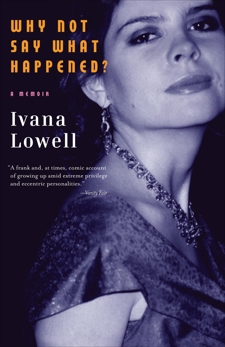 Synopsis: An astonishing and at times outright comic memoir that marks the brilliant debut of a writer raised in a creative, bohemian household characterized by extreme privilege tinged with neglect.

Born into one of the most celebrated Anglo-Irish families, the Guinnesses, Ivana Lowell tells a stunning story of coming to terms with her blue-blood heritage and her own childhood traumas. It is also the story of her intense relationship with her formidably intelligent and complicated mother, the writer Caroline Blackwood. A keen observer with an incisive eye, a wicked sense of humor, and no self-pity, Lowell sets a wide range of scenes with a truly unexpected, almost madcap cast of characters, introducing us to such eccentric figures as her maternal grandmother, Maureen, the Marchioness of Dufferin and Ava. She takes us from the marchioness’s annual ball for her idol and old friend, the Queen Mother, to Maureen’s stately Irish home, Clandeboye (where the marchioness hopes to die), to summers in Dufferin’s villa in Sardinia; through moves to carelessly furnished, drafty, too-large English country houses with her mother and stepfather, the poet Robert Lowell; to working in Manhattan at Miramax Books for Harvey Weinstein and a trip with his brother, Bob, to the Academy Awards; to her wedding at New York’s Rainbow Room and finally to a life with her daughter. Ivana also has darker stories to tell including her own stints in rehab, and discovering, after her mother’s death, the secret Lady Caroline had successfully kept from her.

Why Not Say What Happened? introduces a dazzling new literary voice and the fascinating story of a tragic and remarkable family.