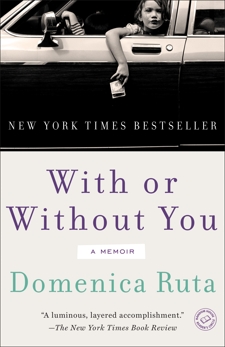 With or Without You: A Memoir

Domenica Ruta grew up in a working-class, unforgiving town north of Boston, in a trash-filled house on a dead-end road surrounded by a river and a salt marsh. Her mother, Kathi, a notorious local figure, was a drug addict and sometimes dealer whose life swung between welfare and riches, and whose highbrow taste was at odds with her hardscrabble life. And yet she managed, despite the chaos she created, to instill in her daughter a love of stories. Kathi frequently kept Domenica home from school to watch such classics as the Godfather movies and everything by Martin Scorsese and Woody Allen, telling her, “This is more important. I promise. You’ll thank me later.” And despite the fact that there was not a book to be found in her household, Domenica developed a love of reading, which helped her believe that she could transcend this life of undying grudges, self-inflicted misfortune, and the crooked moral code that Kathi and her cohorts lived by.

With or Without You is the story of Domenica Ruta’s unconventional coming of age—a darkly hilarious chronicle of a misfit ’90s youth and the necessary and painful act of breaking away, and of overcoming her own addictions and demons in the process. In a brilliant stylistic feat, Ruta has written a powerful, inspiring, compulsively readable, and finally redemptive story about loving and leaving.

Praise for With or Without You

“A singular new coming-of-age memoir traces one girl’s twisting path up from mean streets (and parents) to the reflective life of a writer. . . . The burgeoning canon of literary memoir . . . begets another winner in Domenica Ruta’s searing With or Without You. . . . [A] gloriously gutsy memory-work.”—Elle

“Stunning . . . comes across as a bleaker, funnier, R-rated version of The Glass Castle and marks the arrival of a blazing new voice in literature.”—Entertainment Weekly

“Powerful . . . Ruta found an unconventional voice, a scary good mixture of erudition and hardened street smarts. Her writing is also, as they say in Danvers, wicked funny—though in her case wicked is more an adjective than an intensifier. . . . [With or Without You] hums with jangled energy and bristles with sharp edges. . . . Ruta writes with unflinching honesty.”—Slate