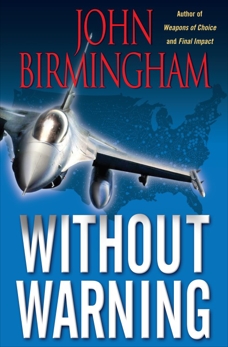 Synopsis: BONUS: This edition contains an excerpt from John Birmingham's After America.

In Kuwait, American forces are locked and loaded for the invasion of Iraq. In Paris, a covert agent is close to cracking a terrorist cell. And just north of the equator, a sailboat manned by a drug runner and a pirate is witness to the unspeakable. In one instant, all around the world, everything will change. A wave of inexplicable energy slams into the continental United States. America as we know it vanishes. From a Texas lawyer who happens to be in the right place at the right time to an engineer in Seattle who becomes his city’s only hope, from a combat journalist trapped in the Middle East to a drug runner off the Mexican coast, Without Warning tells a fast, furious story of survival, violence, and a new, soul-shattering reality.