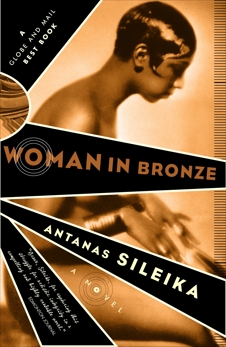 Synopsis: Tomas Stumbras grew up in war-torn Eastern Europe: a dark, rainy land of misty hills and valleys, where the whispers of the ancient gods and devils are still heard by ordinary people. He is a god-maker, a sculptor with a gift for turning dead wood into protective saints for use in prayer. But it's 1917 and even remote Lithuania feels the transforming effects of World War I. Caught between the destruction around him and his own drive to create, Tomas must abandon the stability of home and family and strike out on his own.

Tomas moves from his thatched wooden farmhouse to the vibrant streets and artistic community of Paris in the Roaring Twenties, where temptation and jealous are right around the corner from brilliance, beauty and fame. Working as a carpenter in the Folies Bergere, he encounters the dance sensation Josephine Baker and falls for a lovely chorus girl. But even when he finally achieves his dream and becomes an artist, he discovers that success demands sacrifice. Even when you find art and love, infamy and betrayal aren't far behind.

Epic in scope and beautifully evocative of time and place, Woman in Bronze reveals a life lived in extremes. It tells a story of love found and lost, creative endeavour and the price of celebrity and stardom.


Excerpt from Woman in Bronze
Easterners flooded into Paris, and it hummed with Russian, Polish, Yiddish, Romanian, and many other languages among the porters and labourers. Tomas also saw many English and Americans, always rich, usually laughing, and often drunk. Waves were washing over the city from all ends of the world, churning into a froth in which even a talented person could drown.