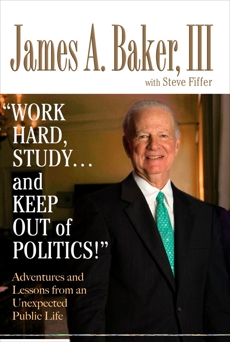 'Work Hard, Study...and Keep Out of Politics!': Adventures and Lessons from an Unexpected Public Life

Synopsis: A revelatory memoir from one of the great political minds of our time.

“Baker's book will interest political junkies on both sides of the aisle and remind them that party politics do not require disrespect between opponents.”−Library Journal

The real inside story of why Gerald Ford did not ask Ronald Reagan to be his running mate in 1976−and why Reagan did not pick Ford in 1980; the battle over Florida 2000; the aborted White House job switch that inadvertently opened the door to the Iran-Contra scandal; the Bush campaign's wish that Dan Quayle would offer to resign from the ticket in 1992; the White House turmoil in the dark days following the Reagan assassination attempt; and a great deal more....

White House Chief of Staff (twice), Secretary of State, Secretary of the Treasury, and campaign chairman for three different candidates in five successive presidential campaigns−few people have lived and breathed politics as deeply as James Baker. Now, with candor and Texas-style storytelling, and not a few surprises, he takes us into his thirty-five years behind the scenes.

None of it was planned. His grandfather, the “Captain,” drilled this advice into him: “Work hard, study...and keep out of politics!” Then a personal tragedy changed the life of a forty-year-old Texas Democratic lawyer and he never looked back. From campaign horsetrading, which sometimes got rough (“Politics ain't beanbag,” says Baker), to the inner councils of the Reagan and Bush administrations and the controversies beyond, Baker offers frank talk and spellbinding narratives, along with personal appraisals of six presidents and a constellation of others. It was a long, unexpected journey from Houston, Texas, to Washington, D.C.−and you'll want to travel it with him.