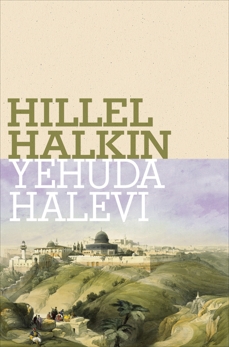 A masterly biography of Yehuda Halevi, one of the greatest of Hebrew poets and a shining example of the synthesis of religion and culture that defined the golden age of medieval Spanish Jewry.

Like Maimonides, with whom he contrasts sharply, Yehuda Halevi spanned multiple worlds. Poet, philosopher, and physician, he is known today for both his religious and secular verse, including his famed “songs of Zion,” and for The Kuzari, an elucidation of Judaism in dialogue form. Hillel Halkin brilliantly evokes the fascinating world of eleventh- and twelfth-century Andalusian Spain in which Halevi lived and discusses the influences that formed him. Relying on the astonishing discoveries of the Cairo Geniza, he pieces together the mystery of Halevi’s last days, with its fateful voyage to Palestine, which became a haunting legend.

An acclaimed writer and translator, Halkin builds his account of Halevi’s life and death on his magnificent translations of Halevi’s poems. He places The Kuzari within the wider context of Jewish thought and explains why, more perhaps than any other medieval Jewish figure, Halevi has become an inspirational yet highly controversial figure in modern Jewish and Israeli intellectual life.