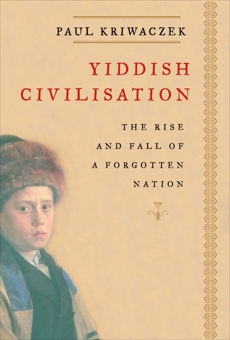 Yiddish Civilisation: The Rise and Fall of a Forgotten Nation

Synopsis: Paul Kriwaczek begins this illuminating and immensely pleasurable chronicle of Yiddish civilization during the Roman empire, when Jewish culture first spread to Europe. We see the burgeoning exile population disperse, as its notable diplomats, artists and thinkers make their mark in far-flung cities and found a self-governing Yiddish world. By its late-medieval heyday, this economically successful, intellectually adventurous, and self-aware society stretched from the Baltic to the Black Sea. Kriwaczek traces, too, the slow decline of Yiddish culture in Europe and Russia, and highlights fresh offshoots in the New World.Combining family anecdote, travelogue, original research, and a keen understanding of Yiddish art and literature, Kriwaczek gives us an exceptional portrait of a culture which, though nearly extinguished, has an influential radiance still.