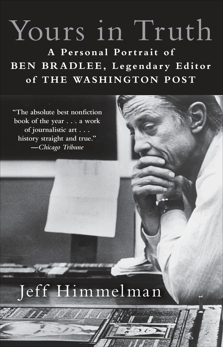 Yours in Truth: A Personal Portrait of Ben Bradlee, Legendary Editor of The Washington Post

Synopsis: An intimate profile of the legendary Washington Post editor whose life and career encompassed Watergate, the Pentagon Papers, and the Kennedys—as portrayed by Tom Hanks in the Steven Spielberg film The Post

“A fairly complete and rare portrait of this last of the lion-king newspaper editors.”—The New York Times Book Review

Ben Bradlee was a fixture on the American scene for nearly half a century—a close friend to John F. Kennedy; the center of D.C. social life; and a crusty, charismatic editor whose decisions at the helm of the Post during Watergate changed the course of history.

Granted unprecedented access to Bradlee and his colleagues, friends, and private files, Jeff Himmelman draws on never-before-seen internal Post memos, correspondence, personal photographs, and private interviews to trace the full arc of Bradlee’s forty-five-year career—from his early days as a press attaché in postwar Paris through the Pentagon Papers, Richard Nixon’s resignation, the Janet Cooke fabrication scandal, and beyond. Along the way, Himmelman also unearths a series of surprises—about Watergate, and about Bradlee’s private relationships with Post owner Katharine Graham, reporters Bob Woodward and Carl Bernstein, and President Kennedy and his wife, Jackie.

“Don’t feel that you have to protect me,” Bradlee told Himmelman whenever the reporting started to strike close to home. “Follow your nose.” Those instructions, familiar to any Post reporter, have resulted in this thoughtfully constructed and beautifully written account of a magnetic man whose career has come to define the golden age of newspapers in America, when the press battled for its freedom—and won.

Praise for Yours in Truth

“The absolute best nonfiction book of the year . . . a work of journalistic art . . . history straight and true . . . should be required reading at the Columbia School of Journalism.”—Chicago Tribune

“Surprising and compulsively readable . . . Himmelman’s chapters on Watergate are especially masterful, untangling that web in a fresh and comprehensible way.”—Minneapolis Star Tribune

“Embedded in Yours in Truth there are fundamental insights about journalism and the role of a dynamic press.”—The Atlantic