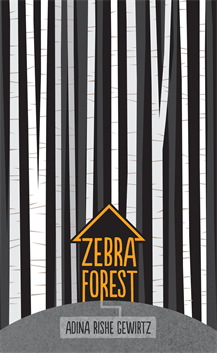 In an extraordinary debut novel, an escaped fugitive upends everything two siblings think they know about their family, their past, and themselves.

When eleven-year-old Annie first started lying to her social worker, she had been taught by an expert: Gran. “If you’re going to do something, make sure you do it with excellence,” Gran would say. That was when Gran was feeling talkative, and not brooding for days in her room — like she did after telling Annie and her little brother, Rew, the one thing they know about their father: that he was killed in a fight with an angry man who was sent away. Annie tells stories, too, as she and Rew laze under the birches and oaks of Zebra Forest — stories about their father the pirate, or pilot, or secret agent. But then something shocking happens to unravel all their stories: a rattling at the back door, an escapee from the prison holding them hostage in their own home, four lives that will never be the same. Driven by suspense and psychological intrigue, Zebra Forest deftly portrays an unfolding standoff of truth against family secrets — and offers an affecting look at two resourceful, imaginative kids as they react and adapt to the hand they’ve been dealt.
From ZEBRA FORESTWe called it the Zebra Forest because it looked like a zebra. Its trees were a mix of white birch and chocolate oak, and if you stood a little ways from it, like at our house looking across the back field that was our yard, you saw stripes, black and white, that went up into green. Gran never went out there except near dusk, when the shadows gathered. She didn’t like to be out in full sunlight usually, and told me once she didn’t like the lines the trees made. Gran was always saying stuff like that. Perfectly beautiful things — like a clean blue sky over the Zebra — made tears come to her eyes, and if I tried to get her to come outside with me, she’d duck her head and hurry upstairs to bed. But then it would be storming, lightning sizzling the tops of the trees, and she’d run round the house, cheerful, making us hot cocoa and frying up pancakes and warming us with old quilts. We had few rules in our house, but keeping out of the Zebra Forest in a storm was one of them.