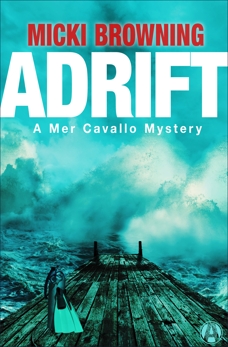 Synopsis: AGATHA AWARD NOMINEE • In this breathtaking mystery debut, a marine biologist turned divemaster stands accused of a chilling crime after a dive gone wrong. But do the murky circumstances point to an accident, a murder, or a supernatural encounter?

Mer Cavallo thought adjusting to a laid-back life in the Florida Keys would be a breeze. But when she rescues a floundering diver who claims to have seen a ghost, she’s caught in a storm of intrigue. News of the encounter explodes on social media, attracting a team of ghost hunters who want to capture proof that a greenish ghoul haunts Key Largo’s famed USS Spiegel Grove shipwreck.

Mer knows the wreck inside and out, and agrees to act as their safety diver. When Ishmael, the charismatic leader of the group, vanishes during a midnight dive, everyone except Mer is convinced the ghost has claimed another victim. Topside, the tenacious detective in charge of the investigation finds Mer’s involvement in both incidents suspicious, and her enigmatic neighbor resurrects ghosts from her past.

Determined to find a rational explanation, Mer approaches Ishmael’s disappearance as any scientist would—by asking questions, gathering data, and deducing the truth. But the victim’s life is as shrouded in mystery as his disappearance. Still, something happened under the water and before long, she’s in over her head. When someone tries to kill her, she knows the truth is about to surface. Maybe dead men do tell tales after all.