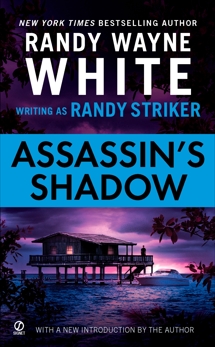 Synopsis: With his New York Times bestselling Doc Ford novels, author Randy Wayne White has been hailed as “the best new writer since Carl Hiaasen” (Denver Post). But decades ago, under the pen name Randy Striker, he was already delivering non-stop thrills with ex–Navy SEAL Dusky MacMorgan, who finds that seduction can be the deadliest thrill of all.

MacMorgan has been many things to many people in his lifetime: warrior, adventurer, lover, hell-raiser, and hero. Now, the U.S. government wants him to be something else—an assassin.

At the ultra-exclusive Florida resort of St. Carib, the rich, famous, and elite flock to have their bodies sculpted and scalpeled to perfection. An odd destination for MacMorgan, but that’s where he’s landed in his quest to take out a cabal of international terrorists before they can wipe out the resort’s entire coddled client list.