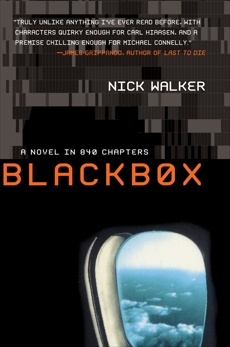 Blackbox: A Novel in 840 Chapters

Cross a road, take a train, or get on an airplane and you put your life in the hands of a stranger -- every bit as screwed up, every bit as fallible and as human as you are. Then the person turns out not to be a stranger at all, and suddenly it's much worse.

In America and Britain and the sky in between, an apparently disparate group of people is connected, whether intimately or by chance, to the tragic death of a stowaway on board flight AF266.

As the action veers across countries and time zones, the stowaway's real identity is revealed through stolen black box recordings, answering machine messages, sitcom outtakes, and court transcripts. Told in a shifting, circular narrative, the interwoven lives make up a jolting and layered puzzle that builds to a heart-stopping, chilling climax.

An intelligent and invigorating novel with a bizarre menu of dysfunctional characters, Blackbox is the story of an attempt to erase a life on tape.