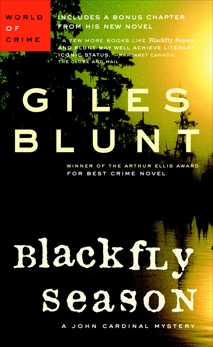 Synopsis: Red Bear stood close to the fire and stretched toward the sky, every muscle in his body straining. The veins in his neck stood out like electrical cords. His voice had gone thin and raspy and the words came streaming out of him with a terrible urgency. The words– if in fact they were words – collided with one another. [Blackfly Season, page 94]

According to Detective John Cardinal, the truly diabolical thing about blackflies is their stealthy silence; there is no warning and no chance of a pre-emptive strike. Every year at the beginning of May, the blackflies take over Algonquin Bay, swarming in clouds out of their winter wombs in the standing water of lakes, creeks and swamps.

But this year, the blackflies aren’t the only ones to make their way into town. A self-proclaimed shaman and card-carrying member of the Chippewa First Nations has also arrived. Known only as Red Bear, the mysterious figure has recruited three young men from town who share a history of drug use and living on the fringe.

And Red Bear isn’t the only mysterious visitor. At the World Tavern, the oldest but perhaps least reputable bar in the city of Algonquin Bay, OPP officer Jerry Commanda is enjoying his regular Friday night Diet Coke with a squeeze of lemon. He meets a young red-haired woman who is unable to tell him her name, where she lives, or how she came to be at the World Tavern. It’s not until a hospital X-ray reveals a bullet lodged in her brain that the reason for her amnesia becomes clear.

When John Cardinal and Lise Delorme are called in to take over the case from Commanda, they don’t have a lot of leads on who this mysterious redhead is, let alone why someone would want her dead. And when the mutilated body of a member of the local biker gang the Viking Riders is discovered near long columns of bizarre hieroglyphics, Cardinal and Delorme begin to suspect that it is isn’t just Viking Rider justice.

Despite the climbing body count, Cardinal is distracted. His wife, Catherine, has left to go to Toronto with a group of her photography students and Cardinal is convinced that the stress and excitement of the trip will push her to the breaking point. His worst fears are confirmed when a call reaches him from a student concerned by Catherine’s erratic behaviour. Cardinal speeds to Toronto to reach his wife before she unravels.

When Cardinal returns, a third body turns up with a bullet from the same gun that shot the redhead. Linking the three murders and finding out who’s responsible becomes an intricate game of unravelling the secrets of families and decoding the mysteries of an ancient form of African voodoo.