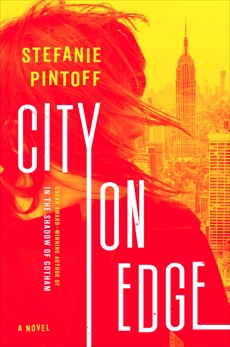 City on Edge: A Novel

The night before the Thanksgiving Day Parade, a crowd gathers on Manhattan’s Upper West Side to watch the giant balloons fill with helium and rise toward the sky. Then the festive ritual takes a terrifying turn—a gunshot rings out, police commissioner Logan Donovan falls, and panic erupts. When the chaos clears, another crime is revealed: Donovan’s daughter, Allie, has been kidnapped. Soon the abductor will make his shocking demands.

Within hours, Special Agent Eve Rossi and her handpicked team of quick-thinking, swift-moving, hard-striking former convicts know a lot about the kidnapper. He’s somewhere close by, holding Allie along with a captive boy. He hates Logan Donovan enough to destroy him. And he will kill.

But there’s more Eve and her team don’t know—about a weapon planted inside the parade, about Commissioner Donovan’s hidden life, and about the secrets his daughter keeps. As people line the streets, bands and marchers prepare, and the massive parade steps off into New York’s echoing canyons, a desperate race begins to keep the city from being torn asunder by a brutal act of violence. But even as her squad deploys for action, Eve grapples with a harrowing question: Whom should she fear more—a vengeful man threatening innocent lives, or a charming, arrogant cop fighting to save his daughter, who may be trying to cover up his crimes?

“The perfect blend: an urban thriller as modern as tomorrow’s New York Times, driven by a two-hundred-year-old idea, with a main character to die for . . . I hope we see plenty more of Eve Rossi and her team.”—Lee Child

“A high-voltage game of parry and thrust.”—New York Daily News

“Pintoff skillfully ratchets up the tension and throws more than one curveball into this twisty, exciting read.”—Booklist (starred review)

“Strong writing, a well-paced plot, and intriguing characters make this one of the best thrillers of the year. Fans of Lisa Gardner will find much to like here.”—Library Journal (starred review)

“A high-velocity roller coaster of a thriller.”—Jeffery Deaver

“A brilliant thriller . . . Stefanie Pintoff is one of the best crime writers at work today.”—Michael Koryta