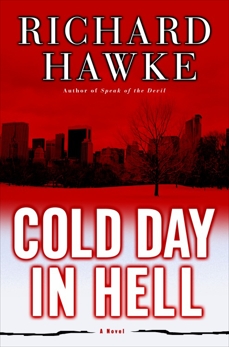 Cold Day in Hell: A Novel

Synopsis: In the stew and dazzle of New York City, savvy, irreverent Fritz Malone–who Susan Isaacs called “the perfect balance of noir P.I. and decent guy”–is embroiled in a string of grisly murders that drags him behind the lurid headlines into the tangled affairs of some the city’s most beautiful people and their ugly truths.

When two women linked with charismatic late-night TV personality Marshall Fox are found brutally slain in Central Park, Fox becomes the prime suspect and is charged with the murders. At the tabloid trial, one of Fox’s ex-lovers, Robin Burrell, is called to testify–and is instantly thrust into the media’s harsh spotlight. Shaken by a subsequent onslaught of hate mail, Robin goes to Fritz Malone for help. Malone has barely begun to investigate when Robin is found sadistically murdered in her Upper West Side brownstone, hands and feet shackled and a shard of mirror protruding from her neck.

But it’s another gory detail that confounds both Malone and Megan Lamb, the troubled NYPD detective officially assigned to the case. Though Fox is in custody the third victim’s right hand has been placed over her heart and pinned with a four-inch nail, just as in the killings he’s accused of. Is this a copycat murder, or is the wrong man on trial?

Teaming up with Detective Lamb, Malone delves deeper into Fox’s past, unpeeling the layers of the media darling’s secret life and developing an ever-increasing list of suspects for Robin’s murder. When yet another body turns up in Central Park, the message is clear: Get too close to Fox and get ready to die.

And Malone is getting too close.

In Cold Day in Hell, Richard Hawke has again given readers a tale about the dark side of the big city, a thriller that moves with breakneck speed toward a conclusion that is as shocking as it is unforgettable.

Praise for Richard Hawke’s Speak of the Devil

“Richard Hawke has managed what some writers spend a lifetime trying to accomplish: He has come up with a character and place that should entertain in countless stories to come.”
–Rocky Mountain News

“Fast-moving, first-rate . . . Hawke’s plot grabs us by the throat. . . . He keeps the suspense mounting.”
–The Washington Post

“[A] bang-bang thriller . . . We are absolutely powerless to stop reading.”
–Chicago Tribune

“Mr. Hawke’s [novel] tours the city . . . with unusual streetwise panache . . . but this isn’t a book that coasts on its urban geography. It lives by its wits, and its wits would work anywhere.”
–The New York Times

“A deftly paced debut that crackles and pops from page 1.”
–Booklist (starred review)

“[An] amazing thriller . . . Hawke’s dialogue is sharp and snappy and the plot moves with all the energy of New York City.”
–Cleveland Plain Dealer

“Hawke razzle-dazzles us with . . . bada-bing narration and quirky, well-drawn characters.”
–The Boston Globe