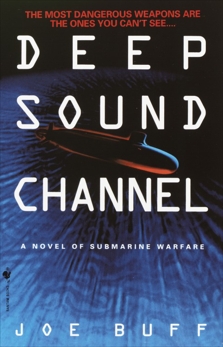 Synopsis: An electrifying new voice in military fiction, Joe Buff has written a riveting and totally realistic tale of military adventure-a spectacular novel that is sure to establish this outstanding author as the new master of the genre. Vividly authentic and impeccably researched, it takes readers into the not-too-distant future, when the United States is embroiled in a tactical nuclear war that will mark a new era of weapons and tactics, geopolitical alignments, and human courage....

The year is 2011, and in South Africa a reactionary coup has established a military government that has begun sinking U.S. and British merchant ships. NATO quickly responds, with only Germany holding back-until Germany starts nuking Poland and eviscerating the French. Now the South Atlantic is a battleground where nuclear-tipped missiles rule-and the only gun worth using is one that seeks and fires from deep beneath the sea.

In response, Lieutenant Commander Jeffrey Fuller and the crew of the nuclear submarine USS Challenger are called in to help. Ceramic-hulled and designed for maximum stealth, the Challenger is being sent to South Africa for a mission critical to stopping the war. Together with a team of Navy SEALs and assisted by Boer freedom fighter Ilse Reebeck, Commander Fuller must infiltrate the enemy coast and attack a compound where scientists are putting together the ultimate biological weapon-a violent, deadly microbe that has the potential to wreak global devastation.

For Jeffrey Fuller, the operation will take him back to his former life as a SEAL. It's his job to steer the team of operatives to shore; penetrate concentric arcs of armaments, minefields, and sensors; and destroy the death lab. If the mission works, the
bioweapon will be destroyed and shock waves will cripple the South African government. If it goes wrong, fallout will kill thousands of innocent people.

Deep Sound Channel provides a rare and telling look into the future of our military's weapons-and into the horrific violence of tactical nuclear war. It is a cutting-edge masterpiece that takes readers on a wild and unforgettable ride of suspense, nuclear warfare, and underwater adventure