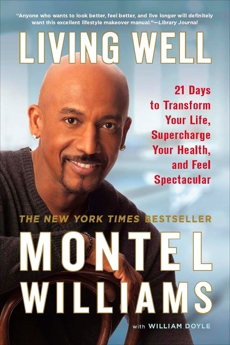 Living Well: 21 Days to Transform Your Life, Supercharge Your Health, and Feel Spectacular

In Living Well, Montel explains the science behind his successful battle against multiple sclerosis, interviewing a global ?SWAT Team? of doctors, scientists, and researchers, and reveals the amazing effects of healthy eating and regular exercise.

Most importantly, Montel shares his groundbreaking 21-Day Living Well Food and Workout Program? a hard-hitting health plan of diet changes, a step-by-step exercise plan, and the gradual addition of raw and whole foods to daily menu plans. This three-week regimen forms the cornerstone of Montel?s successful dietary health plan. Also included are simple, wholesome recipes that are as healthful as they are delicious.

For anyone who wants to fight obesity, cancer, heart disease, and neurological diseases like Parkinson?s, Alzheimer?s, or multiple sclerosis?or if they just want to feel spectacular every day?it?s time to push life to the next level, by Living Well with Montel!