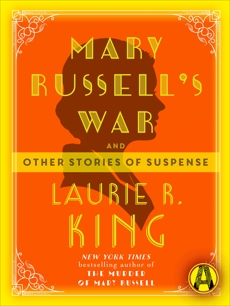 Mary Russell's War: And other stories of suspense

In nine previously published short stories and one brand-new, never-before-seen Sherlock Holmes mystery—available together for the first time—Laurie R. King blends her long-running brand of crime fiction with historical treats and narrative sleight of hand. At the heart of the collection is a prequel novella that begins with England’s declaration of war in 1914. As told in Mary Russell’s teenage diaries, the whip-smart girl investigates familial mysteries, tracks German spies through San Francisco, and generally delights with her extraordinary mind—until an unimaginable tragedy strikes.

Here too is the case of a professor killed by a swarm of bees; Mrs. Hudson’s investigation of a string of disappearing household items—and a lifelong secret; a revealing anecdote about a character integral to The God of the Hive; the story of Mary’s beloved Uncle Jake and a monumental hand of cards; and a series of postcards in which Mary searches for her missing husband, Sherlock Holmes.

Last but not least, fans will be especially thrilled by Mary’s account of her decision, at age ninety-two, to publish her memoirs—and how she concluded that Ms. King should be the one to introduce her voice to the world.

“The most sustained feat of imagination in mystery fiction today.”—Lee Child

“The great marvel of King’s series is that she’s managed to preserve the integrity of Holmes’s character and yet somehow conjure up a woman astute, edgy, and compelling enough to be the partner of his mind as well as his heart.”—The Washington Post Book World

“A lively adventure in the very best of intellectual company.”—The New York Times

“Erudite, fascinating . . . by all odds the most successful re-creation of the famous inhabitant of 221B Baker Street ever attempted.”—Houston Chronicle

“An engaging romp guaranteed to please . . . perfectly written in the style of Sir Arthur Conan Doyle.”—USA Today, on Pirate King

“Mesmerizing—another wonderful novel etched by the hand of a master storyteller. No reader who opens this one will be disappointed.”—Michael Connelly, on The God of the Hive

“Historical fiction doesn’t get any better than this.”—The Denver Post, on The Game