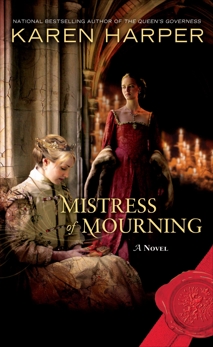 Mistress of Mourning: A Novel

Synopsis: In a gripping historical novel of suspense and romance, two women fight to defeat the enemies of the precarious Tudor monarchy by uncovering the secrets of the dead....

London, 1501. In a time of political unrest, Varina Westcott, a young widow and candle maker for court and church, agrees to perform a clandestine service for Queen Elizabeth of York, wife of Henry VII--carve wax figures of four dead children, two of her offspring lost in infancy and her two brothers, the Princes of the Tower, whose mysterious disappearance years ago has never been solved. Having lost a child herself, Varina feels a sympathetic bond with the queen. And as she works under the watchful eye of handsome Nicholas Sutton, an ambitious assistant to the royals, she develops feelings of quite a different nature....

Then news comes from Wales of the unexpected death of newly married Prince Arthur, the queen’s eldest child and heir to the throne. Deeply grieving, Elizabeth suspects that Arthur did not die of a sudden illness, as reported, but was actually murdered by her husband’s enemies. This time her task for Varina and Nicholas is of vital importance--travel into the Welsh wilderness to investigate the prince’s death. But as the couple unearths one unsettling clue after another, they begin to fear that the conspiracy they’re confronting is far more ambitious and treacherous than even the queen imagined. And it aims to utterly destroy the Tudor dynasty.