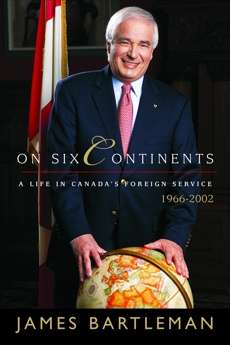 Synopsis: Muskoka, the University of Western Ontario, Ottawa, New York, Colombia, Bangladesh, Nicaragua, Peru, Cuba, Israel, Belgium, South Africa, Australia –the place-names tell the story of an amazing career. Then there are the people involved –Trudeau, Clark, and Chrétien, Kissinger, Castro, Rabin, Walesa, Havel, Mandela and dozens of others. Not to mention the moments of high drama: when young Jim Bartleman becomes Ottawa’s security expert on terrorism during the FLQ crisis in 1970; or when he leads the movement to bring countries like Poland and Ukraine into NATO and the West.

But this is also a light-hearted look at what our diplomats actually do and is full of funny stories: so watch young Jim attend a drunken party with Trudeau; compete with Mother Teresa for Bangladesh babies; or sweep his Belgian bride off her feet to the altar. Bartleman also writes candidly about falling prey to depression, and about his concern, as a native Canadian, to see aboriginal peoples well treated. In summary, a richly varied career, as the only Canadian diplomat to serve on all six continents, well told by a remarkable character.

***
On Six Continents is a Douglas Gibson Book.