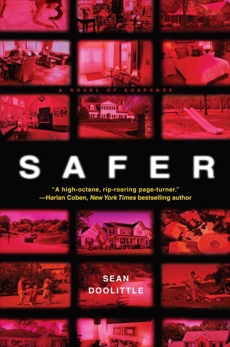 Safer: A Novel of Suspense

Synopsis: From Dirt to The Cleanup, Sean Doolittle has dazzled critics and defied expectations, garnering bolder critical raves with each new novel. “Stylishly written” hailed the New York Times Book Review . . . “Superb” declared the Wall Street Journal . . . “Heart-stopping, gut-clenching, eye-opening” raved the Chicago Tribune. Now Doolittle fulfills all that promise—and more—in Safer, a powerhouse of suspense that will catch you off guard at every turn. . . . A young couple moves into an idyllic little cul-de- sac—and ignites a harrowing journey into darkness as a shocking accusation is made, a family is shattered, and the mystery of a long-ago crime begins to unravel.

For Paul Callaway and his wife, Sara, moving from the East Coast to a quiet midwestern town was a major adjustment. But right from the start, Paul has tried to fit in. He’s played golf with the guys. He’s even joined the Neighborhood Patrol, grabbing a flashlight and a walkie-talkie to make these neatly tended streets even safer. Then Paul makes one mistake—and now they want him gone. But nothing could have prepared Paul and Sara for the quarrel that has erupted between Paul and a neighbor—the self-appointed leader of the Neighborhood Patrol. Or for the next outrage, as police arrest Paul for a sordid crime he didn’t commit. Suddenly Paul’s life, university career, and marriage are at risk, as he finds himself locked in a desperate fight with an angry man, a dark conspiracy, and a secret that began with a child’s disappearance ten years before.