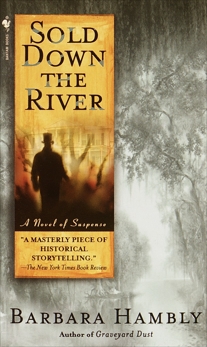 Sold Down the River

Synopsis: In A Free Man of Color, Fever Season, and Graveyard Dust, Benjamin January penetrated the murkiest corners of glittering old New Orleans to bring murderers to justice. Now, in bestselling author Barbara Hambly's haunting new novel, he explores a vivid and violent plantation world darker than anything in the city....  Sold Down the River.

The crisp autumn air of 1834 awakens the French Town to a new season of balls and operas.  But this November there will be no waltzes played by Benjamin January, no piano lessons for Creole children.  For a shadow has emerged from his past-Simon Fourchet, the savage man to whom he was bound in slavery until the age of seven.  When someone he cannot refuse asks the favor, Benjamin reluctantly agrees to reenter the realm of his childhood on Fourchet's upriver sugar plantation.

Abandoning his Parisian French for the African patois of a field hand, Benjamin sets out to uncover who and what lies behind the sinister happenings there.  On All Souls' night, at the dark of the moon, a fire was started in the mill.  A field gang's food has been poisoned and the butler murdered.  And voodoo curse marks appear everywhere.  If the villain cannot be discovered, every slave on Mon Triomphe will be condemned to what passes for justice.

Cutting cane from dawn to nightfall, until his bones ache and his musician's hands bleed, Benjamin strives to unlock the riddle.  Are these the omens of a slave revolt, or something more personal?  As acts of sabotage mount and voodoo signs multiply, he ponders the family in the big house:  Fourchet's pale and pious new wife, his two grown sons, and his shrewish daughter-in-law.  Then the inhabitants of the slave quarters: a proud and secretive cook, young lovers torn apart by a brutal overseer, men and women who long for loved ones sold away.  And what of the neighboring planter, feuding with Fourchet over a piece of land...  or the elusive river trader who knows so many of the servants' secrets?

Somewhere in the warp and weft of these people's lives lurks Benjamin's quarry-whose scheming could destroy not just Fourchet but all his kin and every human being he owns. And Benjamin January must use all his intelligence and cunning to find the killer, before he finds himself...  Sold Down the River.