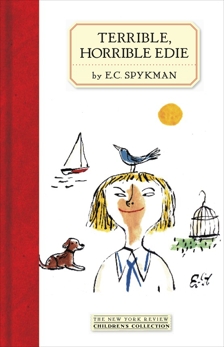 Synopsis: Even if she has lived ten terrible years, terrible, horrible Edie really isn’t terrible and horrible at all, but rather one of the most charming and engaging and gutsy children in American children’s fiction. It’s true of course that Edie does get into—and not always without it being at least a little bit her fault—some pretty terrible and horrible scrapes, and that sometimes she will sulk, but these are the kinds of things that happen to the kid sister of two snooty boys and one fancy-pants girl, not to mention having to deal with the distraction of two half sisters who are no better than babies. Edie’s father and stepmother have headed to Europe for the summer, and though the rest of the family can look forward to good times at a beloved summer house on the sea, Edie still has to fight to hold her own. Adventures on a sailboat and on an island, and the advent of a major hurricane and what Edie takes to be a military coup, all come to a climax when Edie solves the mystery of who stole the neighbor’s jewels and saves, at least for one day, the day.

This story of Edie and the other members of the Cares family may remind readers of Arthur Ransome’s Swallows and Amazons, except that Edie has an experimental, even anarchic streak that is all her terrible, horrible own.