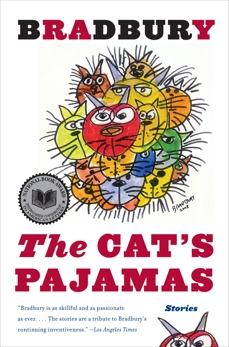 Ray Bradbury is, indisputably, one of America's greatest storytellers. The recipient of the 2000 National Book Foundation Medal for Distinguished Contribution to American Letters, he ranks among the most beloved -- and widely read -- of American authors. In The Cat's Pajamas, this "latter-day O. Henry" (Booklist) takes us on an amazing walk through his six-decade career, presenting twenty-two tales -- some old, some new, all but two never before published.

Here you will find stories strange and scary, nostalgic and bittersweet, humorous and heart-touching, ranging from the not-so-long-gone past to an unknowable future: a group of senators drinks a bit too much -- and gambles away the United States; a newlywed couple buys an old house and finds their fledgling relationship tested; two mysterious strangers arrive at a rooming house and baffle their fellow occupants with strange crying in the night; a lonely woman takes a last chance on love. The final piece in the collection is a story-poem, a fond salute from Bradbury to his literary heroes Shaw, Chesterton, Dickens, Twain, Poe, Wilde, Melville, and Kipling.

The Cat's Pajamas is just that -- the bee's knees -- a touching, timeless, and tender collection from the incomparable Ray Bradbury, and a anoramic view of an amazingly long, rich, and fertile creative career.