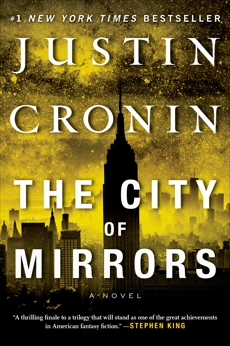 The City of Mirrors: A Novel (Book Three of The Passage Trilogy)

Synopsis: #1 NEW YORK TIMES BESTSELLER • “A thrilling finale to a trilogy that will stand as one of the great achievements in American fantasy fiction.”—Stephen King

You followed The Passage. You faced The Twelve. Now enter The City of Mirrors for the final reckoning. As the bestselling epic races to its breathtaking finale, Justin Cronin’s band of hardened survivors await the second coming of unspeakable darkness.

The world we knew is gone. What world will rise in its place?

The Twelve have been destroyed and the terrifying hundred-year reign of darkness that descended upon the world has ended. The survivors are stepping outside their walls, determined to build society anew—and daring to dream of a hopeful future.

But far from them, in a dead metropolis, he waits: Zero. The First. Father of the Twelve. The anguish that shattered his human life haunts him, and the hatred spawned by his transformation burns bright. His fury will be quenched only when he destroys Amy—humanity’s only hope, the Girl from Nowhere who grew up to rise against him.

One last time light and dark will clash, and at last Amy and her friends will know their fate.

Look for the entire Passage trilogy:
THE PASSAGE | THE TWELVE | THE CITY OF MIRRORS

Praise for The City of Mirrors

“The City of Mirrors is poetry. Thrilling in every way it has to be, but poetry just the same . . . The writing is sumptuous, the language lovely, even when the action itself is dark and violent.”—The Huffington Post

“A masterpiece . . .  with The City of Mirrors, the third volume in The Passage trilogy, Justin Cronin puts paid to what may well be the finest post-apocalyptic epic in our dystopian-glutted times. A stunning achievement by virtually every measure.”—The National Post

“Justin Cronin’s Passage trilogy is remarkable for the unremitting drive of its narrative, for the breathtaking sweep of its imagined future, and for the clear lucidity of its language.”—Stephen King