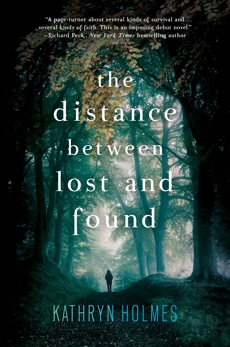 The Distance Between Lost and Found

Blending elements of Laurie Halse Anderson’s Speak and Gary Paulsen’s Hatchet, this gripping story from Kathryn Holmes was deemed “a page turner” by author Richard Peck and “an intense story of survival” by ALA Booklist in its starred review.

Sophomore Hallie Calhoun has just endured the most excruciating six months of her life. Once the rumors about her and the preacher’s son, Luke, made their way around school, her friends abandoned her, and as a result, Hallie has completely withdrawn.

Now on a hiking trip in the Smoky Mountains with the same people who have relentlessly taunted her, Hallie is pushed to her limit. Then Hallie, outgoing newcomer Rachel, and Jonah—Hallie’s former friend—get separated from the rest of the group. As days go by without rescue, their struggle for survival turns deadly. Stranded in the wilderness, the three have no choice but to trust one another in order to stay alive…and for Hallie, that means opening up about what really happened that night with Luke.

From the catty atmosphere of high school to the unpredictable terrain of the mountains, this novel is a poignant, raw journey about finding yourself after having been lost for so long.