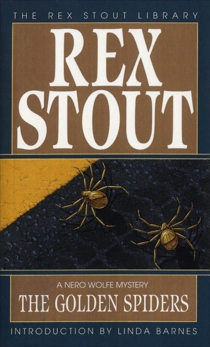 Synopsis: Nero Wolfe was almost as famous for his wealthy clients and extravagant fees as for his genius at detection. So why has he accepted a case for $4.30? And why have the last two people to hire him been ruthlessly murdered? Wolfe suspects the answers may lie in the story of a twelve-year-old boy who turns up at the door of his West Thirty-fifth Street brownstone. In short order, Wolfe finds himself confronted by one of his most perplexing and pressing cases, involving a curious set of clues: a gray Cadillac, a mysterious woman, and a pair of earrings shaped like spiders dipped in gold. The case is all boiling down to a strange taste of greed—and a grumpy gourmand’s unappeasable appetite for truth.

“It is always a treat to read a Nero Wolfe mystery. The man has entered our folklore.”—The New York Times Book Review

A grand master of the form, Rex Stout is one of America’s greatest mystery writers, and his literary creation Nero Wolfe is one of the greatest fictional detectives of all time. Together, Stout and Wolfe have entertained—and puzzled—millions of mystery fans around the world. Now, with his perambulatory man-about-town, Archie Goodwin, the arrogant, gourmandizing, sedentary sleuth is back in the original seventy-three cases of crime and detection written by the inimitable master himself, Rex Stout.